My Love Hate Relationship with the Boucherie

by denise
I'm throwing a little party this weekend.  We do a few every year.  One is always in the summer.... must celebrate the long days.  This summer it's fiesta night.  Not because it's an especially summery theme, just because I miss Mexican food like crazy, and tomatoes and avocados are in season, so I can make good guacamole and salsa.  I hope it goes over well.  The french are known for being afraid of spicy food.  I'm not making habanero salsa or anything, but I was able to find some lovely jalapenos in my eclectic neighborhood and dammit, I'm going to use them. 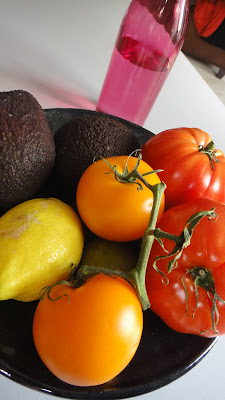 Right, I'm also going to try to make carnitas properly.  It can't be that hard.  I've made the cajun version (smothered pork shoulder) and the southern version (pulled pork) so now I just have to make the mexican version.  Strangely, many call for using orange juice... I wonder if there is some chemical reaction that makes the meat more tender and juicy, 'cause carnitas sure don't taste like oranges.'  Where's Alton Brown when you need him?!


So I went to the boucherie.  I got a whole pork shoulder (about 4 lbs) bone included, and the first thing he asked me was if I wanted to have the bone removed, and how I would like it chopped.  Well thank you, Monsieur Boucher, I don't mind if you do.  I used to do microbiology.  I once worked in a food safety division of the USDA.  Meat, and its associated bacteria freak me out.  I wear gloves sometimes, when I touch meat.  It's weird, freaky, whatever you'd like to call it, I know.  So I LOVE it when the butcher cuts the meat for me.  It saves me the step of sterilization of cutting board and knives, and anything that came in contact with said raw meat.  The nice butcher then wraps it all up and puts it in a lovely plastic bag, takes my money, gives me change, and all without washing his dirty meaty gross hands yet.  >nose crinkling, eye squeezing, cringe<  Just one of the lovely things here that make me have to look the other way.

Nature and Nourishment in Corsica 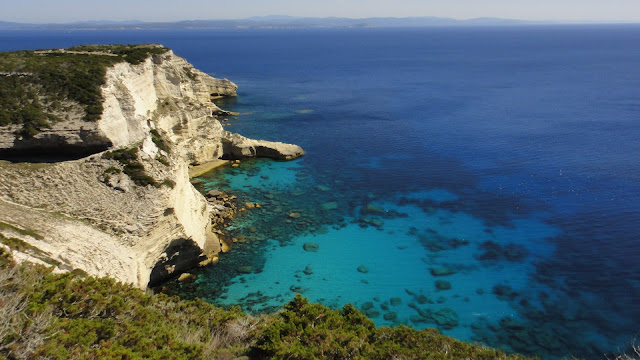 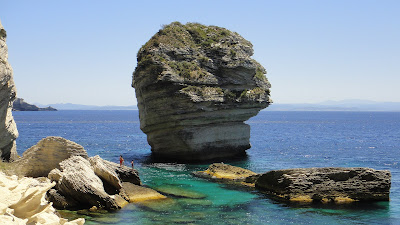 We decided to go on an extended weekend in Corsica.  It's not far, only about an hour and a half plane ride from Paris, it has mountains, and 1,000km of coastline (around 620 miles).  Hello... Hiking and beaches = paradise for this 'Parisian'!

It's been occupied since before time    -really- since BCE and hence has changed hands umpteen times. Normally, you would expect fish on every restaurant menu on an island in the middle of the Mediterranean sea, but since the locals wanted nothing to do with these changes in allegiance, they took to the hills and learned how to live off the land not the sea.  Fortunately for all of us, they stayed there, and to this day make fantastic cheeses and charcuterie. I religiously visited the Ferry Building farmers market in San Francisco every Saturday morning.  Waking up, grabbing a cup of coffee at the wonderful Blue Bottle directly across the street from my old apartment, and walking all the way there.  My attendance was especially frequent in the summertime when there were fresh sweet amazing tomatoes, cucumbers, mint, basil, and my favorite part.... candy!  It came in the form of white nectarines.  I would lovingly pick 6 big juicy wonderful candy nectarines, one to go with my plain yogurt every morning, until there was no more candy at the market.  It was always one of my favorite things about summer, it NEVER got old!

by denise
I guess we never really finished blogs for the trip.  There was more in Japan.  Nara, Kyoto, Nagasaki.  Maybe one day we'll post about them. Vince got really sick in Japan, then we made it to France, started eating again, visiting with family and friends, and getting reacquainted with our new world.  Then I promptly broke the shit out of my arm.  After which I had endless doctors appointments, pain and suffering, tiredness, haziness, and general malaise for almost 6 months.  It's amazing how constant pain affects a person.  You don't realize you're in pain, or that the pain makes you tired and lethargic, until you're all better.   Now I have all this energy, and the neurons are almost firing properly again.  Phew.  I'm glad that's done with.  Sorry to all of you who had to put up with me.

Where we were last seen

When is it again?

What we last saw